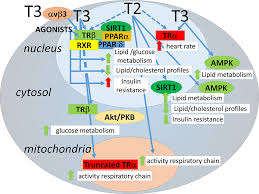 Researchers have identified an enzyme that helps cancer cells make the building materials they need to quickly proliferate. Inhibiting this enzyme could be a strategy to slow down cancer growth, leading to more effective treatments.

Whereas healthy human cells get most of the fatty acids and cholesterol they need to build their cell membranes from the bloodstream, cancer cells cannot wait for their building materials to be delivered by this route.

Instead, cancer cells frequently ramp up the activity of the enzymes involved in synthesizing lipids right in the cell.

One of these families of enzymes is the sterol regulatory element binding proteins, or SREBPs.

SREBPs travel into cell nuclei and turn on genes involved in lipid production, usually in response to specific signals. In some cancer cell lines, including certain liver, colon and breast cancers, a particular SREBP called SREBP1a is overactive.

Fajun Yang, an associate professor of developmental and molecular biology at Albert Einstein, studies exactly how cancer cells supply themselves with lipids.

The newly published research on SREBP1a began when Xiaoping Zhao, the lead author on the new study, was a postdoctoral fellow in Yang’s lab, and continued as a collaboration when Zhao started his own lab at Shanghai Jiao Tong University.
Subscribe now to remove this ad, read unlimited articles, bookmark your favorite post and soo much more

In the new study, the team found that SREBP1a was able to be overactive in cancer cells thanks to another enzyme, pyruvate kinase M2 (PKM2).

PKM2 was coincidentally also known to be involved in supplying hungry cancer cells with surplus energy through a different mechanism: by chemically modifying a small molecule called pyruvate during glucose metabolism. In the new study, the researchers showed that PKM2 was also able to modify SREBP1a.

“Nobody had previously said that this guy, PKM2, regulates lipid metabolism,”
Yang said.

When PKM2 and SREBP1a interact, the SREBP1a becomes more stable, the study showed.

This allows SREBP1a to turn on genes involved in lipid synthesis. Using a small protein that could block the interaction, the authors were able to stop the excess lipid production and slow down cancer cell growth.
Subscribe now to remove this ad, read unlimited articles, bookmark your favorite post and soo much more

“The cancer cell kind of feels like, ‘Oh, I’m fasting to death!'” Yang said. “The tumor cells become especially sensitive; even though they can suck up lots of glucose, they cannot make the building blocks of the cell membrane. If combined with another drug, then this is a potential therapeutic approach.”
The approach is promising because it targets proteins that are not highly expressed in healthy cells.
If cancer cell growth could be slowed down by blocking this pathway, patients might require lower doses of the toxic drugs that actually kill the cancer cells, and thus experience fewer side effects.
The study was funded by the National Natural Science Foundation of China and the National Institutes of Health.
Story Source:
American Society for Biochemistry and Molecular Biology.
READ MORE  How lack of sleep can make you loose weight

New study: These healthy lifestyle habits can increase your life span by a decade or more

Researchers reveal a novel and unexpected function of sleep

Physician-scientists in the Smidt Heart Institute at Cedars-Sinai have created an artificial intelligence (AI) tool that can effectively identify and distinguish between two life-threatening heart conditions that are often easy to miss: hypertrophic cardiomyopathy and cardiac amyloidosis. The new findings were published in JAMA Cardiology.

Children with insomnia likely to continue to suffer as adults, study finds